These technologies work by making a double stranded break in the DNA of the gene you want to edit. The cell then tries to repair that damage and during that repair process the gene sequence at that location can be changed. The main challenges are directing the cutting enzymes (nucleases) to the right sequence (specificity), getting the nucleases to cut at that location a high percentage of the time (cutting efficiency), and directing the cell to repair the DNA using the desired new gene sequence (edit efficiency).

CRISPR gene editing – Developed in 2012, this technology uses a nuclease protein (Cas9 or similar) that carries with it an interchangeable short RNA molecule (guide RNA). The guide RNA directs the nuclease protein to the gene of interest then the nuclease protein cuts the DNA. This is a huge improvement over ZFN gene editing because short RNA molecules are cheap and easy to make, and you can swap them out for any sequence you want you can easily target a single nuclease protein to any gene sequence in any organism. Because this is so specific, you can do a lot of other creative things to increase cutting efficiency and editing efficiency. Once your protocols have been optimized, more complex gene edits like engineered point mutations and gene fusions can be produced more efficiently.

While genome editing using a CRISPR-based system is relatively easy, this advanced technique is not without its challenges. Before the gene-edited product is made, researchers generating their own CRISPR-edited cell lines must introduce the Cas9 enzyme into the cell of interest by methods such as viral transduction or transfection and then validate the enzyme’s gene-editing functionality. To help the do-it-yourselfer, ATCC provides researchers an efficient toolbox to accelerate the gene-editing process: we now offer stable cell lines that constitutively express the Cas9 nuclease. These ready-to-use cell lines enable researchers to carry out CRISPR genome editing and CRISPR interference (CRISPRi) applications with high efficiency, thereby simplifying the genome-editing workflow and getting you closer to data acquisition.

This workhorse cell line expresses the catalytically dead dCas9 fused to a Krüppel-associated box (KRAB) transcriptional repression domain and can be used to carry out CRISPRi-mediated gene knock-down.

This cell line can be used to carry out CRISPR genome editing applications with high efficiency; to create knock-out for studying biological function of genes; and as a platform to optimize gene editing gRNAs or donor plasmids

This brain tissue-derived cell line can be used to carry out CRISPRi-RNA–guided gene expression repression (knock-down) for applications such as cancer and neuroscience research.

Zinc Finger Nucleases (ZFN) and Transcription Activator-Like Effector Nucleases (TALENs) – Developed between 2000 and 2012, these technologies are like CRISPR gene editing except they use differently shaped proteins that bind DNA to direct cutting enzymes/nucleases to the gene sequence for editing. The drawback of these technologies is that you need to develop a new series of proteins for each gene edit you want to make. New proteins are relatively difficult to design and test, making each new gene edit very expensive. Because each new ZFN protein is so expensive, and because it can be difficult to design proteins that efficiently and specifically recognize your DNA sequence of interest, ZFN and TALEN gene editing is usually less efficient than CRISPR gene editing. However, many companies are still using these technologies because the patent and licensing landscape surrounding use of CRISPR gene editing remains unsettled.  For example, to provide researchers with an easy method to detect neural differentiation, ATCC has used ZFN endonucleases to introduce the NanoLuc and HaloTag reporter genes into the promoter of neuronal marker MAP2 and astrocyte marker GFAP, and a GFP reporter into the promoter of the neuronal marker doublecortin (DCX). These gene-edited advanced cell models can be used for basic research or as as a validated model to investigate the neurotoxicity of a variety of chemotherapeutics.

Nothing can hinder the integrity of research efforts like contamination or misidentification. Explore the real-life effects when research materials are not authenticated and the steps we can take to establish best practices in the laboratory.  CRISPR gene-editing technology is a powerful tool for developing cell-based models with disease-relevant mutations. Learn how this advanced technology was used to create an ideal model for screening novel therapeutics targeting multidrug-resistant melanomas.

Mutagenic screening – This method for developing cell lines involves treating cells with toxic chemicals or radiation to cause random mutations that result in the desired attribute. This technique is straightforward, since you don’t have to know the connection between genotype and phenotype ahead of time; however, because of its random nature, mutagenic screening tends to exhibit low efficiency. In addition, the resulting cells probably carry many other unrelated mutations due to the chemical or radiation treatment.

Classical gene targeting – In this traditional cell line development technique, the researcher introduces into a cell culture a foreign DNA construct that includes: the gene you want to edit, a gene for antibiotic resistance, and often a reporter gene. The cells are then incubated in the presence of that antibiotic. Many of the cells will take up and randomly integrate the DNA into the genome. The cells that did not will die, resulting in a situation where only the cells with the new, edited sequence will survive.

The foreign DNA sequence will then be expressed in the surviving cells. This method of cell line development is the weakest, as it is very labor intensive and inefficient. In addition, antibiotic selection is not healthy for the cells and can cause other unrelated genetic changes. This method was originally exploited to generate most of the knockout mice prior to about 10 years ago.

Single cell cloning/clonal selection – Because of the heterogeneous nature of cell lines, the individual cells within a culture vessel are all slightly different. To clone a single cell, the laboratory worker mechanically or chemically disassociates the cells, and then performs a serial dilution. Once these clonal populations have been established, the researcher can then look for slight variations in phenotype between clones. The serial dilution can be repeated to amplify the changes, until the desired models have been generated. While these methods are straightforward in their implementation, it takes a long time to achieve the results and only achieve limited effects.

Gene/transgene overexpression – This example of cell line development implements the introduction of a foreign DNA/gene into the genome of the cell line of interest, resulting in the cell exhibiting some new property. While the method is quick and easy to perform, the introduced gene operates without any of the normal checks and balances that control native gene expression. Because the introduced gene is constitutively expressed or “always on,” gene/transgene overexpression works best if there is a one to one relationship between the target gene and the effect it has on the cell. On the other hand, this technique is extremely versatile because you can introduce any gene from any organism into your cell line of interest. Because you aren’t restricted to genes from the type of cell you’re using, you can get really creative with introducing new traits into existing cell lines

Cell line adaption – Another approach to cell line development involves gradually changing the conditions for growing the cells. Examples of conditions that can be altered include, but are not limited to: the media the cells grow in, the surface (or lack of surface) they grow on, how densely they grow, how fast they grow, and the gradual development of drug tolerance. Like clonal selection, this method is simple but slow, and the scope of potential phenotypic changes is limited.

An example of an adapted cell line in ATCC’s collection is 293T/17 SF cell line. These cells were adapted from the anchorage-dependent parental HEK 293 cell line to growth as anchorage-independent suspension culture, allowing for continuous media exchange and cell dilution, as well as higher density tissue culture for bioproduction applications. These cells were further adapted for optimal growth in serum-free media. Together, these features make the adapted 293T/17 SF cell line an ideal vehicle for industrial-scale viral vector or protein bioproduction.

Differentiation – Another way to develop a cell line is to differentiate an unspecialized stem cell down a specific progenitor lineage. Stem cells or induced pluripotent stem cells (iPSCs) can be differentiated using standardized protocols into types of cells that would normally be very difficult to obtain in large quantities with limited variability.

For example, toxicology and cancer researchers often need to run a large screen which requires large quantities of cells with limited variability. Primary cells offer a high degree of physiological relevance but tend to have high lot-to-lot variability in performance. To address this need, ATCC scientists have differentiated induced pluripotent stem cells (iPSCs) into widely used cell types such as mesenchymal stem cells, CD34+ cells, and monocytes. These iPSC-derived primary cells can be used to build physiologically relevant cell-based assays for drug development in fields such as regenerative medicine, hematology, oncology, and toxicology.

Immortalization – Cells that have useful properties can be harvested fresh from various sources (animals, organs, patient samples, etc), but they can only divide a limited number of times. This introduces issues such as donor availability and inter-experimental consistency. There are few methods of modifying these primary cells to extend the number of cell divisions that they may undergo while retaining in vivo characteristics.

One technique that addresses these challenges is immortalization via the catalytic subunit of human telomerase (hTERT). hTERT-immortalized primary cells are genetically modified such that they exhibit the growth characteristics of a continuous cell line but maintain the physiology of a primary cell. ATCC provides hTERT-immortalized cells from a wide range of tissue and cell types, including epidermal keratinocytes, renal proximal tubule epithelial cells, and mesenchymal stem cells. In addition, ATCC scientists have generated much application data around many of these versatile cells. 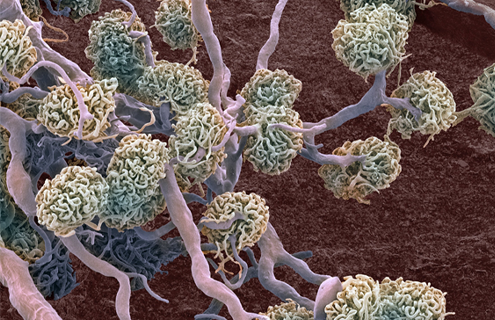 Inspired research starts with advanced models. That’s why we used CRISPR/Cas9 genome editing to create an isogenic cell line that expresses an EML4-ALK fusion oncogene, and then tested it for sensitivity to known inhibitors of ALK. Read the application note to learn more.

Cancer immunotherapy is an exciting new approach for cancer treatment, and immuno-oncology is growing fast. That’s why we generated monocyte luciferase reporter cell lines that contain the response elements of immune-regulated transcription factors. What this webinar to learn how to make your immunotherapy development bigger, better, brighter.

Get the Cell Model

This cell line is essential for in vivo bioluminescence imaging of xenograft animal models to study human lung cancer and monitor cancer drugs.