Reporter systems have a diverse array of applications in the basic and applied sciences. In microbiological research, reporter systems have served in the analysis of gene expression, protein-protein interactions, microbial quantification and detection, host-pathogen interactions, drug discovery, and food testing. Consequently, the implementation of these transgenic microorganisms has considerably enhanced our knowledge of microbial transcriptomics, proteomics, and pathogenesis, with significant implications in the development and evaluation of novel therapeutics and quality control assays. In the present article, we will highlight the reporters commonly used in microbiological research, and will delve into further detail on the various applications of reporter-labeled strains.

Currently, fluorescence- and luminescence-based reporter systems are typically used for microbial analyses as each provides a readily measurable and distinguishable phenotype. Of the fluorescent proteins available, the green fluorescent protein (GFP) is frequently used because it is well-characterized and has a number of convenient inherent properties such as spontaneous fluorescence, high thermal stability, and resistance to proteases, organic solvents, and detergents.1-4 This particular protein exhibits a green fluorescent signal upon exposure to light in the blue to ultraviolet range and does not require the presence of co-factors or substrates for its use, allowing for a non-invasive mechanism for visualizing pathogenesis, signaling, or protein expression in vivo.5,6 To date, GFP has been used as a reporter in a number of eukaryotic and prokaryotic systems for the analysis of gene expression, localization studies, and compound screening studies, among other applications.

In luminescence-based reporter systems, a luciferase enzyme is used to generate luminescent light through the oxidation of the substrate, luciferin, using oxygen and ATP as co-substrates.7,8 Currently, there are a number of known laboratory-derived luciferase genes available for research use, each of which differs in origin or intracellular stability to support a broad range of hosts. Luminescent reporters are ideal for microbial studies as they have a number of exceptional features including high sensitivity, a wide dynamic range, and an instantaneous measure of total reporter expression. This type of signaling system provides valuable information and is a versatile tool; however, there are a couple items to note. This system functions as an endpoint assay, and cannot be used for assays that have multiple time points.8 Also, luciferase reporters require the addition of substrates for detection, and depending on assay format may require specialized equipment for measurement. Thus, it is imperative to carefully consider which reporter system to use when designing your assay to ensure that you are using the best reporter for your experiment.

Regardless of the reporter chosen, reporter-labeled strains are very valuable and powerful tools for a wide variety of research applications. On an intracellular level, reporter systems have been employed in the analysis of promoter activity and gene expression in microbial strains. For the analysis of promoter activity, transcriptional fusions can be generated by cloning the promoter region of a gene of interest into a reporter plasmid. Upon the activation of the promoter element, the reporter gene will be expressed.9 This type of reporter gene fusion is ideal for analyzing and quantifying the activity of a specific promoter under various conditions as well as analyzing the effects of promoter modification. For gene expression studies, translational fusions are frequently used. These reporter fusions combine the genetic sequences of a reporter gene with the gene of interest under a single promoter, allowing for the synthesis of a hybrid protein. These translational fusions are ideal for monitoring protein production, localization, degradation, secretion, or transfer.9 Together, reporter fusion systems are ideal for examining the intricacies of microbial signaling pathways, metabolism, and pathogenesis.

For a broader range of applications, reporter genes can be cloned into expression vectors and subsequently transformed or transfected into various microbial strains to allow for in vivo visualization and quantification. This general use of reporter-labeled strains is ideal for a variety of basic and applied studies, including host-pathogen interactions and drug discovery. Here, transgenic microorganisms expressing reporter genes provide a unique tool for analyzing the invasion, colonization, competition, localization, and pathogen load of a specific microbial pathogen within host cells or tissues under different physiological conditions or stages in the infection cycle.13,14 Moreover, the ability to easily visualize and quantify microbial strains allows for an efficient and reliable mechanism to quickly screen a large number of antimicrobial therapeutics against a specific pathogen, as well as determine the growth inhibitory dose of the drugs in question.13,15 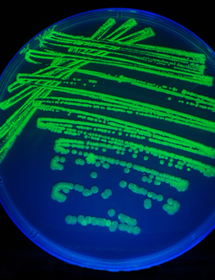 Implementing a reporter system can be challenging with regard to cloning procedures, transformation protocols, and construct validation. Start your research with validated GFP- and luciferase-labeled bacterial strains from ATCC. 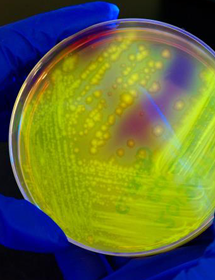 In this application note, we present a Pseudomonas-GFP pathogenesis model system to demonstrate the use of reporter-labeled strains in studying bacterial pathogenesis, host-pathogen interactions, and compound screening assays.

Another general application of reporter-labeled strains is their use as positive controls in quality control analyses, such as food testing procedures. In food safety-related studies, tracking and identifying foodborne pathogens in raw food products is a matter of public health and safety. Generally, most foods are complex systems containing diverse microbial populations, so it can be challenging to identify contaminants and discriminate pathogenic from non-pathogenic strains. The use of reporter-labeled control strains offers an efficient and reliable method to identify contaminants as well as differentiate control strains from actual food contaminants or the naturally occurring microflora.16,17 Moreover, these strains provide a useful tool for predicting microbial growth kinetics during food processing. This latter type of analysis allows food manufacturers to predict the evolution of food products during storage, manufacturing, or preservation mishaps to help identify food safety concerns and avoid spoilage.18

When obtaining strains for reporter-based studies, it is important to go to a reliable source that provides authenticated reference standards. This will ensure that all acquired microorganisms are accurately identified down to the species or strain level, as well as functionally characterized for any relevant traits. ATCC, for example, offers a number of low-passage, fully characterized strains for use in a variety of applications. Though, once the appropriate strains are acquired, implementing the reporter system can be challenging and time consuming with regard to cloning procedures, transformation or transfection protocols, microbial growth requirements, and strain validation. In response to this concern, ATCC has developed and successfully transformed expression vectors harboring either GFP or luciferase reporter genes into a variety of pathogenic bacterial strains for use in broad-based reporter studies including general imaging studies or the analysis of bacterial pathogenesis, host-pathogen interactions, drug screening, or food testing. Each of these strains has been thoroughly examined for reporter expression, vector stability, and compatibility with various fluorescence or luminescence detection technologies. Moreover, each strain is easily quantifiable and exhibits consistent growth rates and fitness trends as compared to the parent strain.

Overall, reporter systems provide unique and powerful tools for microbiological research. By developing reporter-labeled strains using authenticated microorganisms, or by acquiring these strains from a reliable source, the scientific community can come one step closer to understanding a number of complex microbial systems and processes.

*Distributed only within the United States

Products featured in this white paper

GFP-labeled strain with applications in pathogen detection and in vivo localization research.

Reporter-labeled opportunistic pathogen for use in fluorescence imaging and detection.

Bacterial pathogen with applications in the production of live, avirulent vaccines, and enteric disease research.

Reporter-labeled opportunistic pathogen for use in fluorescence imaging and detection.