Growing concern over bacterial food contamination has led to increased examination of food testing protocols in today’s industry. Currently, the use of bacterial strains as positive controls in testing protocols is not widely practiced for fear of cross-contaminating samples. Due to ongoing scrutiny of food testing methodology and growing regulations under the Food and Drug Administration (FDA) Food Safety Modernization Act, it is imperative to have control strains with unique, easily detectable traits that distinguish positive control strains from actual food contaminants, diminishing the fear of cross-contamination and improving current practices.1

The use of GFP reporters offers an attractive method for easily distinguishing controls strains from true contamination. This reporter system is well characterized, highly stable, and has been used for a number of biological applications. Further, this reporter protein readily exhibits a fluorescent signal upon exposure to UV light and does not require the presence of co-factors or substrates for its use, allowing for a rapid, easy, non-invasive mechanism for visualizing bacteria.

The GFP signal from reporter-labeled strains was detected by exposing colonies to UV light (Figure 1). The fluorescence from individual cells was also confirmed via microscopy and flow cytometry using the appropriate excitation and emission (Figure 2). 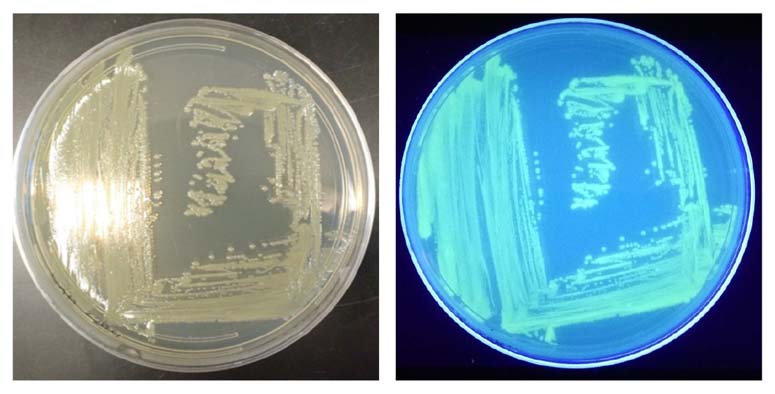 Figure 2. Microscopy and flow cytometry analyses from representative reporter-labeled and progenitor strains. Evaluation of cells through the use of a 40X objective with a 488 nm filter and phase contrast demonstrated that (A) progenitor ATCC BAA-2219 cells did not show any fluorescence, while (B) transformed ATCC BAA-2219GFP cells showed green fluorescence. GFP presence was also determined by flow cytometry analysis. (C) The overlaid histogram exhibits data from progenitor (red) and reporter-labeled E. coli cells (green) acquired on a CytoFLEX Cytometer (Beckman Coulter, Inc.) using a 488 nm laser and GFP filter set. The figure demonstrates a clear separation of the reporter-labeled GFP strain and the progenitor strain. 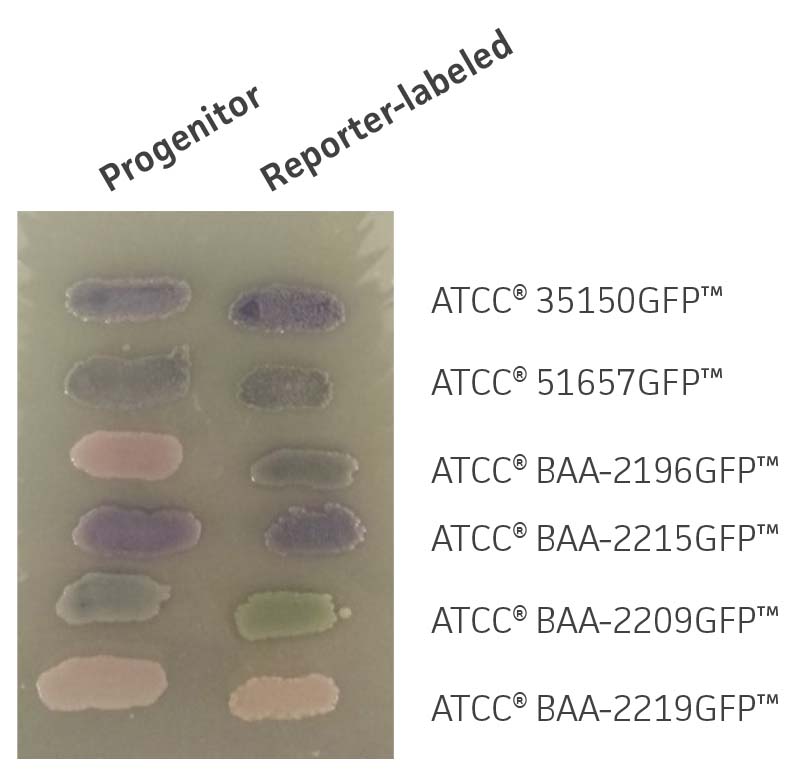 To determine whether gfp affects the growth and viability of the reporter-labeled E. coli, growth studies were performed (Figure 4). The growth constant (k) varied from 2.3±0.5 to 3.6±1.2 generations/hour in the absence of the plasmid (progenitor) and from 1.6±1.1 to 1.9±0.9 generations/hour in the presence of the plasmid (reporter-labeled). The maximum decrease in the growth constant was a 45.8% drop for ATCC BAA-2219GFP and ATCC BAA-2196GFP. All changes were within an acceptable range as these strains were intended for qualitative assays that simply require visible growth after overnight culturing on plates.

Figure 4. Growth rate of progenitor and reporter-labeled strains. Growth curves were performed in triplicate to determine the (A) growth constant (k) and (B) growth curve. Using the Bioscreen C MBR (Oy Growth Curves Ab Ltd.), 200 μL cultures were prepared with a 1:100 inoculum from an overnight culture and were incubated at 37°C in Tryptic Soy Broth (TSB) with constant shaking. Error bars represent standard error.

To determine the stability of the gfp plasmid, the engineered reporter-labeled strains were passaged once every 24 hours under temperature stress at 42°C to mimic the testing conditions used for STEC. The percentage of GFP positive colonies varied depending on the strain, ranging from 87-100% of the population after 2 days (Figure 5). This level of plasmid stability is within an acceptable range for the intended qualitative testing workflow.

Figure 5. Plasmid stability. Reporter-labeled strains were grown in 5 mL of TSB at 42°C and passaged 1:100 into fresh TSB once every 24 hours. A serial dilution was performed to obtain a countable number of colonies. 100 μL of an appropriate dilution was plated on TSA and incubated overnight at 37°C. The percentage of colonies expressing the reporter was recorded daily over 4 days. Error bars represent standard deviation.

In this study, multiple serogroups of E. coli were engineered with GFP reporters. Phenotypic changes between the progenitor and reporter-labeled strains were minimal on chromogenic medium. As expected, growth rate differences between the progenitor and reporter-labeled strains were present in liquid culture but were acceptable for the qualitative assays for which the strains were designed. The gfp plasmid was stable in bacterial populations for ≥2 days. These reporter-labeled bacteria strongly emit light and can be detected immediately after exposure to UV light, eliminating uncertainty about cross-contamination. This study demonstrates that GFP-labeled QC strains can be routinely used as positive controls to increase reliability in food testing assays.

Products featured in this application note

Toxigenic strain isolated from a stool sample in Ohio. This strain has applications in enteric disease research and food testing.

Toxigenic strain isolated from a stool sample in Virginia. This strain has applications in food testing and enteric disease research.