During World War II, antibiotics became available and their widespread use changed the way humans fought infection. At the time, they were referred to as “wonder drugs” due to their ability to safely and effectively treat infectious disease. Their substantial use over the past 70 years has since saved countless lives, and continues to do so today. However, with the overuse and misuse of these drugs in both humans and animals, scientists are discovering a disturbing trend of antibiotic resistance among bacteria. Antibiotics are now no longer the “wonder drugs” they once were.

To combat this issue, we must not only re-evaluate how antibiotics are being prescribed and used, but think outside of the box when it comes to the prevention and treatment of disease. An attractive mechanism under evaluation, and in current use in some countries, is bacteriophage therapy. This form of treatment, which was first used in the 1920’s, involves the administration of bacterial viruses to treat prokaryotic infections. Here, bacteriophages invade bacterial cells and, if the bacteriophage is lytic, will take over the host machinery to make more phage components, eventually resulting in cell lysis.1 Because bacteriophages are species-specific, and in some cases strain-specific, they can be used to target the infecting pathogen without harming human cells or surrounding microflora.2 This is in stark contrast to the use of antibiotics, which affects the entire microbiome of the patient. 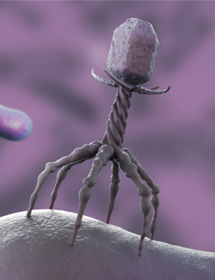 Bacteriophages provide formidable weapons for preventing and treating bacterial infections. Start your research on these viruses by exploring our extensive collection of bacteriophages and host strains.

There are, of course, several limitations and drawbacks to this type of therapy. For starters, the safety of bacteriophages is not wholly known. For the most part, these viruses appear to be innocuous as they have been used as therapeutic agents in Eastern Europe and the former Soviet Union for a number of years and are fairly common in the environment.1 However, it is possible for bacteriophages to carry out transduction. As such, it would be important to verify that the bacteriophage could not package extra host DNA or carry any bacterial sequences encoding, or homologous to, virulence factors, toxins, or antibiotic resistance genes.1,2

Host specificity of these bacterial viruses are also an issue, where an infecting bacterial species would need to be identified in order to determine which bacteriophage is optimal for use. This would require the isolation and culture of the strain causing infection, which may be time intensive or laborious depending on the growth rate or fastidious nature of the pathogen. Lastly, bacterial hosts can become resistant to bacteriophages, limiting their long-term use. Despite these drawbacks, there have been numerous studies depicting bacteriophage therapy as a safe possible alternative to antibiotic therapy in the treatment of bacterial infections.

Overall, multidrug resistance poses a significant threat. Alternative treatment such as bacteriophage therapy may offer a promising mechanism for the eradication of infection; however, further research is needed.

Pseudomonas aeruginosa is an opportunistic pathogen with natural resistance to numerous antibiotics. Explore how bacteriophages can be used against these pathogens.

Cholera is a global threat to public health. Explore how bacteriophages can be used toward the development of effective treatments against this enteric pathogen.

Toxigenic strains of Escherichia coli present a significant problem in the food industry. Discover how bacteriophages can be used to promote food safety.

Explore the use of this bacteriophage in tackling MRSA infections.

Isolated from swine feces for the study of foodborne infections.

Explore the use of this bacteriophage in enteric disease research.

get the phage
View all bacteriophages