The discovery of antibiotics in the early twentieth century has revolutionized the treatment of infectious diseases, saving millions of lives and easing the suffering of many. However, as the structure and function of antibiotics has evolved through the efforts of biotech and pharmaceutical companies, microorganisms have adapted in parallel, exchanging genetic information and optimizing effective methods to avoid therapeutic biocide. In the last several decades, this concern has become more pronounced with the emergence of multidrug-resistant organisms in both community- and hospital-acquired infections, resulting in increased morbidity, mortality, and healthcare expense. Here, we will discuss the growing threat of antimicrobial resistance, novel therapeutic approaches, and the importance of antimicrobial-resistant reference strains in reducing the emergence and spread of multidrug-resistant infections.

Antimicrobial resistance is currently recognized as one of the greatest threats to human health worldwide.1 According to the World Health Organization (WHO), antimicrobial-resistant strains are present in all parts of the world, and new resistance mechanisms continue to emerge and spread globally.2 In the United States alone, at least 2 million people become infected with antibiotic-resistant bacteria, with approximately 23,000 associated deaths each year.3 These patients are typically at an increased risk of more debilitating clinical outcomes and death, and consume more healthcare resources as compared to patients infected with a drug-sensitive strain of the same species.2 Infection with these microorganisms is further complicated by the limited number of effective therapeutic options. In some cases, clinicians have resorted to using older drugs, for which there may be limited data on safety and efficacy to guide the dosage or duration.4,5 Overall, this highlights the dire need for novel and effective therapeutics to treat multidrug-resistant infections.

As the number of antibiotics effective against multidrug-resistant strains is beginning to dwindle, there have been a variety of efforts made to evaluate novel therapeutic options. For example, one novel mechanism used in a study by Nicolosi et al. employed the use of fusogenic liposomes to transport vancomycin into gram-negative cells.6 Under normal conditions, vancomycin is only used to treat gram-positive organisms. It is inactive against gram-negative bacteria due to the different mechanism in which gram-negative bacteria produce their cell walls, as well as other factors relating to entering the outer membrane of gram-negative organisms. Fusogenic liposomes offer an alternative method for the delivery of the antibiotic across the gram-negative outer membrane. These small unilamellar liposome vesicles are able to adhere to and fuse with the external membrane; thus, if you load these liposome vesicles with an antibiotic such as vancomycin, you can transport the antibiotic across the membrane. Overall, this offers a promising mechanism for extending the use of current antibiotics.

Another emerging therapeutic approach against multidrug-resistant strains is the use of antimicrobial peptides. For example, in a study by Routsias et al., the group found that human beta-defensin 2, which is a naturally occurring peptide, exhibited high bactericidal activity against Acinetobacter baumannii. As antimicrobial peptides are naturally occurring, are bactericidal, and are broad-spectrum, they offer a promising mechanism for treating drug-resistant infections.7 Antisense agents also provide another potential therapeutic approach for treating drug-resistant infections by inhibiting resistance mechanisms directly at the nucleic acid level. These oligonucleotides could potentially be designed to bind specific mRNA or DNA sequences that confer resistance to antibiotics, thus blocking either translation or gene transcription, rendering the cell susceptible to antibiotic treatment. However, as these nucleic acids would have no intrinsic antibacterial activity of their own, they would have to be used in conjunction with antibiotics as needed.8

Before the use of antibiotics, some efforts were made to use bacteriophages for the treatment of bacterial infections. Following the first isolation of a bacteriophage in 1917, bacteriophages have been extensively used and developed in several countries throughout the former Soviet Union.9 The primary advantage to this form of treatment is the specificity of a bacteriophage toward a specific bacterial target. This would allow for direct killing of a bacterial pathogen without harming the resident microflora or the patient. In turn, this would help reduce the likelihood of opportunistic, secondary infections from occurring. However, this specificity also poses a potential problem in that to effectively treat an infection, the causative agent must be properly diagnosed.10,11 Further, it is possible for bacterial strains to become resistant to certain types of bacteriophages following continual exposure; however, this could be potentially overcome through the use of genetically modified bacteriophages. 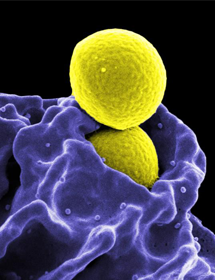 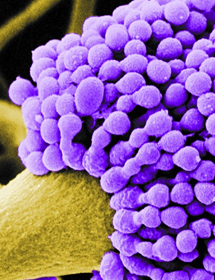 Our portfolio includes clinical and environmental fungal strains that are ideal for the development and evaluation of novel antifungal drugs and updated sterility protocols.

Regardless of the type of therapeutic approach, it is important to ensure that the novel treatment is both safe for patient use and effective against a variety of drug-resistant strains. This can be evaluated through in vitro analyses using authenticated strains and cell lines. Characterized microbial strains with known antibiotic susceptibility profiles are ideal for evaluating the efficacy of a novel therapeutic against different species that vary in their resistance/susceptibility profiles. These strains would also be effective in the development and validation of novel detection methods as it would allow a mechanism to evaluate the sensitivity and specificity against various species and mechanisms of drug resistance. For analyzing the safety of the therapeutic, primary cells derived from various organ systems and donors can provide a quick mechanism for screening therapeutics for any potential toxic effects.

To support this need, ATCC offers a complete set of solutions to advance multidrug-resistance research, including drug-resistant microbial reference strains from various clinical and environmental sources as well as primary cells, media, and reagents for drug toxicity screening studies. Each of these reference materials are produced under ISO 9001 certified and ISO/IEC 17025 accredited processes, ensuring reliability and reproducibility of research data. Further, to ensure that each of these products are of the highest quality before they reach your laboratory, ATCC has authenticated each strain using phenotypic and genotypic analyses to guarantee species identification, culture purity, and biochemical consistency.

Overall, multidrug-resistant microbial strains are continually implicated in a number of infections worldwide, resulting in significant increases in morbidity, mortality, and healthcare expense. To help control the emergence and spread of these pathogens, discovering new and effective treatment methods is of the upmost importance. To support this need, ATCC offers fully authenticated, characterized strains and cell lines for use as positive controls. These cultures are ideal for evaluating the efficacy and toxicity of novel therapeutic treatments. In conclusion, microorganisms are rapidly acquiring mechanisms of resistance to antibiotics. Only through aggressive action and scientific ingenuity can the emergence and spread of multidrug resistance be prevented.

Klebsiella pneumoniae is a common antibiotic-resistant pathogen. Use this strain to move your diagnostics and drug discovery research forward.

Explore the use of this multidrug-resistant strain toward the development of alternative therapies.

Carbapenem-resistant strains for the development and evaluation of rapid detection methods and novel antibiotics.

Develop novel diagnostic tools and therapeutics with this antifungal-resistant pathogen.