Synthetic Nucleic Acids for the Development and Evaluation of In Vitro Diagnostic Devices Designed to Detect Dengue, Chikungunya, and Zika

Hematophagous arthropod vectors are responsible for the transmission of some of the most devastating diseases throughout the world. The World Health Organization estimates that vector-borne diseases account for over 17% of all infectious diseases, contributing to more than 1 billion cases and 1 million deaths annually.1 Accurate diagnosis of these diseases can be complicated due to a variety of factors, including analogous clinical presentation, serological cross-reactivity, or the possibility of co-infection. Thus, the accurate and rapid diagnosis of vector-borne diseases through validated diagnostic methods is critical in enabling prompt treatment and controlling microbial dissemination. Here, we discuss the co-circulation and potential co-infection of the mosquito-borne Dengue (DENV), Chikungunya (CHIKV), and Zika (ZIKV) viruses; the challenges associated with the identification and discernment of these viruses; and the need for authenticated control materials for the validation of in vitro diagnostic tools.

Outbreaks of mosquito-borne diseases are common in tropical and subtropical climates in regions throughout the Americas, Africa, Asia, and the Pacific Islands. Environmental changes, unplanned urbanization, and the globalization of travel and trade have enhanced the spread of DENV, CHIKV, and ZIKV to many of these geographic areas, resulting in localized epidemics and potentiating viral co-circulation. Within these environments, transmission of DENV, CHIKV, and ZIKV between humans is facilitated via the Aedes aegypti and Aedes albopictus mosquito vectors.2-5 This overlap between affected areas combined with a shared competent vector has enabled the possibility of viral co-infection within a single host.6-9 However, given the similar clinical presentation (Table 1) of these viral strains, co-infections may not be readily identified and distinguishing between infectious agents based on symptoms alone may be complicated.

DENV, CHIKV, and ZIKV can be diagnosed through viral isolation, serological tests, molecular-based methods, or a combination of these techniques.13-16 Viral isolation enables the identification of an active infection and is considered to be a sensitive and specific form of detection. However, this method is laborious and can only be performed by personnel with technical expertise within laboratories equipped with the appropriate biosafety level infrastructure. In contrast, serological-based assays that detect the presence of anti-viral IgM antibodies are considerably more rapid and are often the go-to method of diagnosis. However, these assays are less sensitive and specific as it may take several days before IgM antibodies reach detectable levels within a patient; in addition, antibodies may still be at appreciable levels months following viral clearance, and serological cross-reactivity with similar viruses can occur.11,13,16-18 For example, in the detection of DENV, serological assays are not reliable until the fifth day following the onset of symptoms and antibodies can remain detectable 2-3 months following viral clearance.13,19 Further, cross-reactivity with other flaviviruses such as West Nile virus, St. Louis encephalitis virus, Japanese encephalitis virus, yellow fever virus, and ZIKV have been reported.13-16 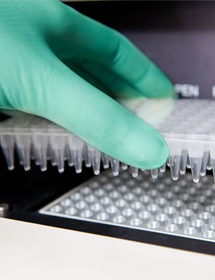 We provide a variety of ready-to-use standards that can be used throughout the assay development process. Explore our collection of molecular standards and inactivated organisms for molecular diagnostics development.

Health care providers rely on diagnostic tests to detect disease and monitor health. Discover why advanced biological models are essential for the development and validation of these essential tools.

The molecular-based detection of viral RNA in serum via reverse transcription polymerase chain reaction (RT-PCR) is the preferred method for the early detection and confirmation of DENV, CHIKV, and ZIKV in clinical samples.20 This method enables rapid, reliable detection and quantification of viral load and is considerably more sensitive than serological methods and easier to perform than viral isolation. Within the last decade, there have been a number of molecular-based assays developed for the detection of DENV, CHIKV, and ZIKV in serum and/or mosquito samples, including multiplex RT-PCR assays for the simultaneous detection of DENV and CHIKV.21-30 More recently, single-reaction, multiplex RT-PCR assays have been developed with the ability to detect and distinguish all three viruses from the same sample, enabling the identification of a singular infection or co-infection within mosquitoes or clinical samples.31,32

To aid in the development and evaluation of molecular-based methods for the detection of DENV, CHIKV, and ZIKA, IVD manufacturers may rely on RNA preparations as positive control materials. However, as these viruses are challenging to cultivate and have specific biosafety level requirements, acquiring these materials can prove challenging. To circumvent these issues, ATCC has developed quantitative synthetic molecular standards under ISO 13485 guidance for CHIKV, DENV serotypes I-IV, and ZIKV comprising short conserved fragments that represent clinically relevant regions of the genome. As compared to genomic RNA preparations, synthetic molecular standards are easier to use as controls for RT-PCR assays, demonstrate a longer shelf-life, exhibit less variability, and eliminate the need for viral propagation. Further, they are compatible with various existing molecular assays, can be handled in a biosafety level one facility, are stable, and can be shipped internationally without the need for a specialized permit. Taken together, these synthetic molecular standards provide convenient, safe, and well-characterized reference materials for use as control materials in the manufacture and validation of molecular-based assays.

Overall, vector-borne diseases represent a serious concern throughout the world. Rapid and reliable diagnostic assays are imperative in enabling prompt treatment and managing viral transmission. However, similar clinical presentation, the possibility of co-infection, and serological cross-reactivity can complicate a diagnosis. To help support the need for validated IVDs designed for the detection of DENV, CHIKV, and ZIKV infection or co-infection, ATCC has developed synthetic molecular standards representing clinically relevant regions of the viral genome. These products provide convenient, safe materials that can be used as positive controls in assay development and validation.

Quantitative Synthetic RNA from the Chikungunya virus to help with your infectious disease research.

Develop your next assay with quantitative synthetic preparations.

Get the RNA
View all synthetic molecular standards