Development and Validation of Quantitative Synthetic Molecular Standards for Human Herpesvirus 6A, 7, and 8

Herpesviridae is a large family of double-stranded DNA viruses that have the ability to infect a wide range of hosts. Within this family, there are 8 distinct viruses known to cause significant disease in humans; among these are human herpesviruses 6A (HHV-6A), 7 (HHV-7), and 8 (HHV-8). HHV-6A and HHV-7 are members of the Betaherpesvirinae subfamily and the Roseolovirus genus. These viruses primarily infect young children, typically presenting with fever and rash; in immunocompromised individuals, the infection may progress to hepatitis, pneumonia, seizures, or encephalitis. HHV-8, also known as KSHV, is an oncogenic virus associated with Kaposi’s sarcoma in immunocompromised patients. This virus has also been linked to primary effusion lymphoma, HHV-8-associated multicentric Castleman’s disease, and KSHV inflammatory cytokine syndrome.

The accurate detection and quantification of these viruses during the early stages of infection are essential for managing clinical symptoms. However, viral growth and purification can be difficult, time-consuming, and costly. PCR-based methods provide an ideal alternative to traditional culture-based approaches; however, these molecular-based methods are dependent on the availability of high-quality reference materials. To address this need, ATCC has designed and developed quantitative synthetic molecular standards for HHV-6A, HHV-7, and HHV-8. Here, we used a proprietary strategy that incorporates key target regions from the genome as well as conserved regions used for viral detection and identification in various published assays. The synthetic standard sequences were validated through next-generation sequencing, and precise DNA copy numbers (copies/µL) were generated using droplet digital™ PCR (Bio-Rad). The sufficiency of each standard was then tested using an independent, publicly available qPCR assay, verifying the efficacy of the design against relevant assays. Here, ten-fold dilutions were used to create standard curves, with DNA concentrations ranging from approximately 1.0×102  to 1×106 copies/µL. Within these data sets, the HHV-6A, HHV-7, and HHV-8 standards had R2  values of 0.997, 0.992, and 0.997, respectively, indicating a high degree of reproducibility. Likewise, these standards displayed high efficiency and amplification, with slopes ranging from M=-3.477 to -3.835. Overall, these data demonstrate the applicability of the HHV synthetic molecular standards as controls in the development and validation of molecular-based detection and quantification assays. 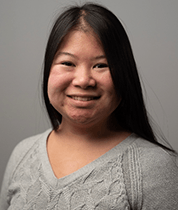 Britany Tang is a Biologist at ATCC Microbiology Research and Development. She has extensive experience in the fields of molecular biology and microbiology. Her current work focuses on designing synthetic DNA and RNA molecular standards for molecular diagnostic assays and the development of mock microbial communities for microbiome research. Prior to joining ATCC, her research was centered on arboviral replication and pathogenesis. Britany holds a bachelor’s degree in Biology from George Mason University.

Quantitative synthetic preparation that includes fragments from the minor capsid protein (ORF 26) and the latency-associated nuclear antigen (LANA or ORF 73).