Human induced pluripotent stem cell (iPSC)–derived neurospheres provide an advanced in vitro system for modeling the human brain and studying the toxic effects of environmental chemicals. This report describes a straightforward and robust method of generating neurospheres from ATCC iPSC-derived neural progenitor cells and further supports their utilization for experimental applications such as dopaminergic differentiation and drug toxicity assays.

Human induced pluripotent stem cell (iPSC)–derived neurospheres provide an advanced in vitro system for modeling the human brain. This system can be used to investigate areas of research focused on rare genetic diseases,1 disease pathology,2 immunological and host-pathogen interactions,3,4 and the toxic effects of environmental chemicals.5 Here, we use ATCC iPSC-derived neural progenitor cells (NPCs) to generate 3-D neurospheres in vitro. This report describes a straightforward and robust method of generating neurospheres and further supports their utilization for experimental applications such as dopaminergic differentiation and drug toxicity assays.

A neurosphere is a spherical formation of neural cells resulting from their inherent motility and tendency to coalesce in culture. Traditional in vitro neurosphere cultures are derived from site-specific tissue and are generally acquired from non-human sources. Neurospheres derived in such a manner do not contain a pure population of neural stem cells and are therefore highly dynamic, non-clonal, and variable.6,7 Because of this dynamicity, researchers find it challenging to manipulate and control experimental parameters, confounding experimental results.7 Additionally, cells derived from non-human sources may not accurately capture the complexity of human physiology, calling into question the relevance of those studies.8

One approach to recapitulating this complex physiology in vitro is to use cells derived from primary human brain tissue. However, because of the limited availability of primary human brain tissue, especially of normal phenotype, and the ethical concerns associated with human embryonic stem cells,9 an alternate representative model is necessary. NPCs provide a dependable alternative to generating relevant in vitro 3-D models such as neurospheres.

NPCs derived from a normal donor (ATCC ACS-5003) and a donor with Parkinson’s disease (ATCC ACS-5001) were first grown in 2-D culture using the Protocols for NPC Expansion and Dopaminergic Neuron Differentiation provided on the ATCC website. Once confluent, cells were subcultured in DMEM:F12 (ATCC 30-2006) supplemented with the Growth Kit for Neural Progenitor Cell Expansion (ATCC ACS-3003) and plated directly onto ultra-low attachment (ULA) vessels (Corning Costar) at the desired cell density. After 12-24 hours, individual cells coalesced to form uniform circular spheres. Media was replenished every two days by allowing the spheres to settle and then removing the majority of the spent media without disturbing the spheres. Subculturing of neurospheres was performed by breaking the spheres into smaller segments via gentle pipetting every 7-10 days. With this method, we found that neurospheres grew exponentially over the course of 7-10 days (Figure 1).

Further, NPC-derived neurospheres successfully maintained their progenitor state up to two weeks in culture, as seen by the uniform expression of NPC-specific markers such as pax6 and nestin (Figure 2, top panel). Moreover, 3-D neurospheres were also able to successfully transition back into 2-D NPC culture as confirmed by NPC-specific marker expression (Figure 2, bottom panel). 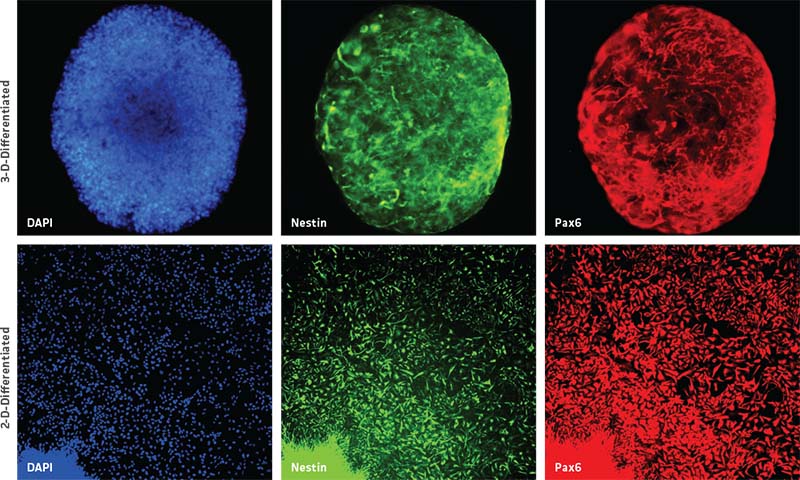 NPC solutions from ATCC are a complete system

Uniform neurospheres were generated by plating NPCs at the 12,800 cells/well in each well of a U-bottomed 96-well ULA plate. Comparable 2-D NPC cultures were seeded at 12,800 cells/well (40,000 cells/cm²) in each well of a 96-well tissue culture treated plate coated with Cell Basement Membrane (ATCC ACS-3035). After 3 days, both cultures were treated with various types and dosages of widely available chemotherapeutic drugs. After 24 hours post-drug exposure, a resazurin-based viability assessment was performed. NPCs from two different donors—one normal donor and another with Parkinson’s disease phenotypes—were used in order to elucidate differences to drug sensitivity.

Neurospheres derived from healthy donor cells (ATCC ACS-5003) appeared to be significantly affected by paclitaxel and vincristine at all three dosages as compared to the control, whereas no significant differences were seen for neurospheres from diseased cells (ATCC ACS-5001)(Figure 6A and B). Similar difference in sensitivity to paclitaxel and vincristine was observed in the two different NPCs (Figure 6C and D). Interestingly, NPCs from healthy donors demonstrated greater sensitivity to paclitaxel and vincristine as compared to the neurospheres derived from the same cells (red asterisk, Figure 6A and C). And this trend was also seen for NPCs and neurospheres from the diseased donor (red asterisk, Figure 6B and D). Responses to amiodarone and chlorhexidine were found to be similar between both neurospheres from healthy (ATCC ACS-5003) and diseased cells (ATCC ACS-5001)(Figure 6A and B) and NPCs (Figure 6C and D). However, NPCs were slightly more sensitive to amiodarone and chlorhexidine as compared to their neurosphere counterparts (Figure 6). 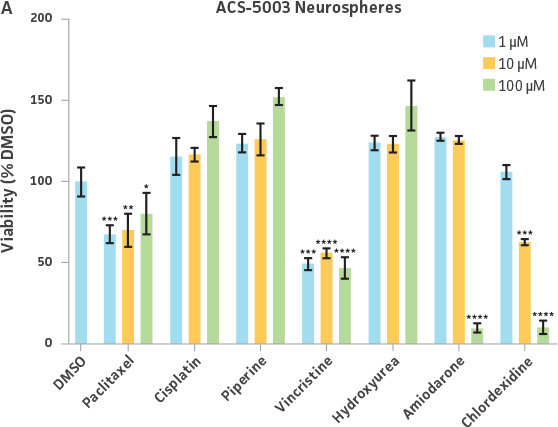 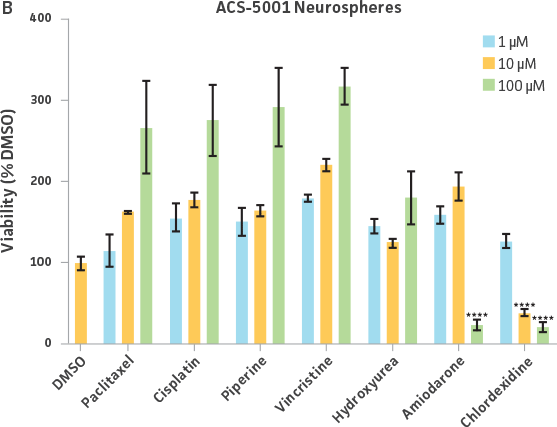 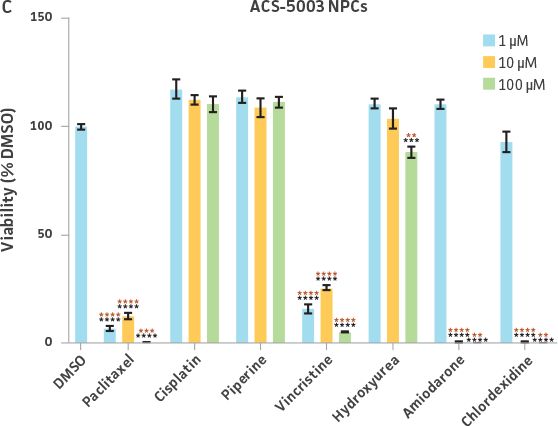 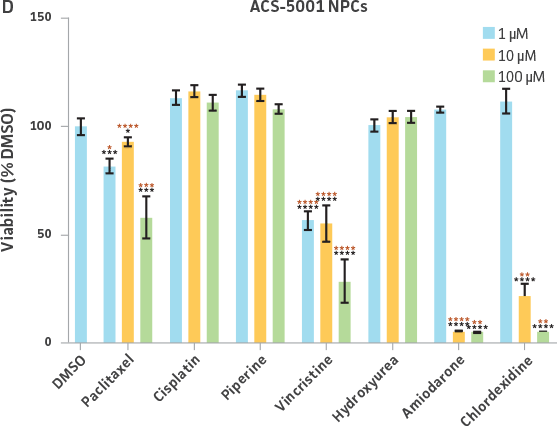 Neurospheres generated from NPCs formed solid circular spheres without the formation of any hollow cavities, suggesting that the cells maintained their non-differentiated state. When multiple neurospheres encountered one another, they formed a cluster of individually attached spheres instead of forming one large fused sphere (not shown). We were also able to successfully cryopreserve and recover segmented neurospheres in ATCC Stem Cell Freezing Medium (ATCC ACS-3020; data not shown). The subculturing duration of neurospheres may vary depending on the quality and donor-type of the originating iPSC line. Therefore, ideal passaging of neurospheres should occur when they reach around 250-400 μm in diameter as assessed visually under a microscope. Neurospheres larger than 500 μm in diameter begin forming dark centers that are indicative of a necrotic core (data not shown). We were also curious to see if it was possible to convert the derived 3-D neurospheres back to 2-D NPCs. Therefore, we plated NPC-derived neurospheres into Cell Basement Membrane (ATCC ACS-3035) Gel-coated culture vessels and found that neurospheres were easily able to transition back into 2-D NPCs (Figure 2). These 2-D NPCs still maintained their progenitor state as noted by the expression of nestin and pax6 markers (Figure 2).

Both the normal and the Parkinson's disease-derived NPCs were able to form neurospheres that showed TUJ1 positive staining, although the disease-derived neurospheres exhibited large areas that lacked staining of the early marker of neuronal differentiation (Figures 4 and 5).

We also exposed 3-D neurospheres and 2-D NPC cultures to a multidrug regimen and found that 3-D neurospheres were less sensitive to the various drug treatments as compared to the 2-D NPCs that were also exposed to the same drug treatments (Figure 6). Additionally, we found differential drug responses between 3-D neurospheres from normal and Parkinson’s disease phenotypes (Figure 6). Interestingly, 3-D neurospheres from both normal (ATCC ACS-5003) and Parkinson’s disease (ATCC ACS-5001) phenotypes displayed significantly higher viability (>100%) as compared to the DMSO control. This could be due to synergistic interactions between cells and drugs.10 Increase in viability (>100%) was also seen for the 2-D NPC group but the fold increase was much lower compared to their 3-D counterparts. These findings highlight the significance of utilizing iPSC-derived 3-D models such as 3-D neurospheres in studying the various physiological mechanisms at play.

3-D cell culture systems, such as neurospheres, provide more robust platforms to study tissue-relevant physiology than traditional, 2-D models. In this study, we successfully generated 3-D neurospheres from normal- and Parkinson’s disease donor–derived NPCs. We first differentiated the NPCs into dopaminergic neurons using ATCC’s NPC Dopaminergic Differentiation Kit and subsequently cultured those neurons in ULA vessels until they aggregated into uniform circular spheres. Next, we assessed the potency of various chemotherapeutic drugs on neurospheres derived from normal or disease NPC lines. The method presented here is straightforward and reproducible because it does not require any synthetic scaffolds such as hydrogels or specialized equipment such as bioreactors. We believe that this method will provide the necessary flexibility to generate neurosphere cultures that fit the needs of specific research protocols.

This serum- and xeno-free medium has been optimized for freezing organoids, neural progenitor cells, and stem cells.